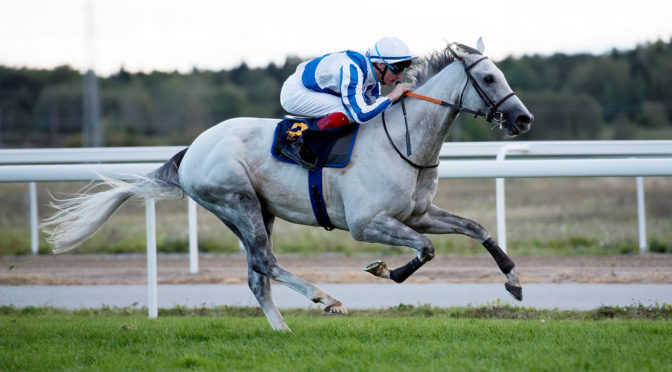 Canadian International (Grade 1)  at Woodbine will draw a lot of attention from Europe. Thundering Blue crushed the Scandinavian elite on his way to this race and the Swedish racing community will definitely be watching. The race is number nine on the card and is scheduled for 5.41 Eastern Time, perfect just before bedtime in Sweden and before the pubs close in England.

It is not the strongest field that could be found for a race over this trip, but still, it is a good bunch of horses more than ready to fight the European raiders.  The German horse Khan has a morning line of 10/1 which seems very generous. Khan is in splendid form and is coming from a Group 1 one win, albeit an easy one. Racing near the lead and a presser he could be hard to catch.  English raider Desert Encounter is clearly inferior to Thundering Blue but unlike the other two Europeans he will get the assistance of Lasix. Thundering Blue is racing from the rear, and many such horses have found trouble in running in North America, where jockeys tends to be more careful not letting opponents finding a free lane. Desert Encounter is also held up so don’t expect any pace from the English

Bandua came to the US from Dermot Weld and was only beaten six lengths in the Irish Derby. Has shown some promise in two starts here in North America but, will likely settle for a minor share of the money.

One key race to look at before this one is the Sword Dancer.

Look at nr 2 Spring Quality. Packed in on the inside, not really getting racing room until the stretch when the leaders already are gone. He must have a great chance in the Canadian International. Funtastic was less impressive and not a horse for me today despite the strong connections.
Another key race is the Northern Dancer over course and distance. The winner was Johnny Bear who benefited from a nice ride from Luis Contreras who is aboard again. Behind him, English Illusion ran a nice third from the back of the pack, always gaining on the leaders and a little stop on the way. Markitoff showed limitations coming in fourth and it is hard to see him reversing form with the two horses mentioned above. Tiz A Slam was dueling for the lead with the favorite, Hawkbill. Tiz A Slam held on well for sixth.

Last, but not least, is Focus Group. This Chad Brown protege has really shown form lately. He has shown Speed Figures of 116 and 118 in his last two at Saratoga and can he transfer the form here he could spring a surprise. Focus Group is a closer, and that is not ideal for Saratoga which makes the latest win even more impressive.

If Thundering Blue is not starting at prohibitive odds he is worth using in you exactas and trifectas, perhaps as a key. The value will come from Focus Group, English Illusion and Khan and I will gamble that they can steal a place or two from Spring Quality and Johnny Bear.