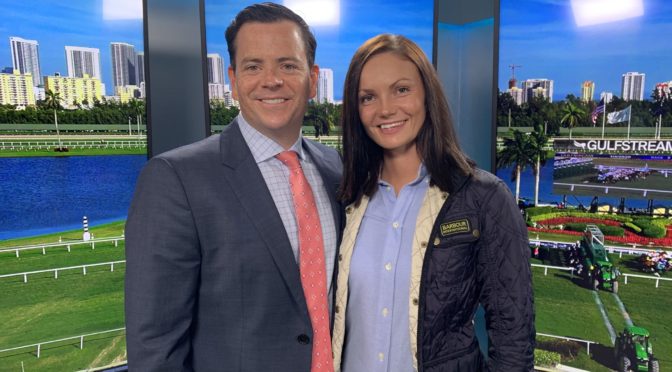 We have a very interesting Early Pick Five from Gulfstream and there is a number of live longshots that could send the payout to the sky.

This race has a key race from March 25 https://youtu.be/4O_RaVgNcR8 and I like what I saw from 2 Snow And Lillylynn. She showed a lot of pace and will get an easier lead this time. 12-1 on the morning line she is my preferred horse of the race. 4 Terrible Tara is held as is 7 Lookn Fine As Wine despite being only 6-1 on the ML. 10 Harmonic Thunder beat Snow And Lillylynn, but was benefiting from the fast pace. 3 Businessindubai started in a similar contest on March 26. The pace was fast but not as fast as on the 25th. She might get the golden spot here.

The most interesting horse in the race is 11 Halfy (More Than Ready). This filly should obviously be claimed for 16 000 dollars by any serious breeder! Halfy is bred by The Wertheimers and the blood is blue. The grand-dam is Halfbridled (Unbridled), who won Breeders’ Cup Juvenile Fillies 2003 under Julie Krone. Halfy wasn’t fast enough for five furlongs on the grass first time out but this distance should suit. Pletzer/Saez does rarely offer any value.

This baby race for has drawn a field of eight and the also eligable 9 Bailey could be of interest, should he be given the opportunity to compete. The clear favorite should be 7 Golden Pal. This Uncle Mo colt is trained by Wesley Ward and cost 325 000 dollars at Keenland. It looks like Mr Ward hasn’t forgot to train Golden Pal. Golden Pal breezed 48 on April 11 and should be fit to win. Tyler Gaffalione up makes this one a standout.

Michael Yates have been working 4 Peppi and 5 Just Right Mike together and they seem hard to separate. Miggy Vasquez is riding Just Right Mike which is a plus. 8 First Navy Admiral is bred to win early.

Thursday’s race for maiden fillies was won by Arindel/Juan Alvarado. That is putting 9 and 3 Gatsby into the mix.

A low level claimer where everything can happen. 4 Summer Mischief and 8 Millionaire Runner have some recent form. They might be vulnerable to a class dropper like 1 Big Boy Bruno or 3 Love Nest. I kind of like 5 Differential to go well under Mario Fuentes.

Not the strongest maiden claimer. The Also Eligables are of interest but preference is for Todd Pletcher’s 7 Garner State Park who comes from the same race as a lot of the runners in Race 1. Luis Saez up and if he can get a better start this time Garner State Park should be hard to beat. Saffie Joseph is teaming up with Tyler Gaffalione and 5 Fast Fraction should be of interest if fit from a break. Might get an easy lead today. 8 A Beautiful Day should also be looking for the lead and is on the shortlist dropping in class. 11 Pact should be able to drop in behind the leaders and could spring a surprise.

This looks like a sure thing for 2 Philly Special. She beat a couple of these last time out and should be able to confirm the firm from a perfect draw. 4 Maries Melody has been knocking on the door for a while now. Should be thereabouts again.