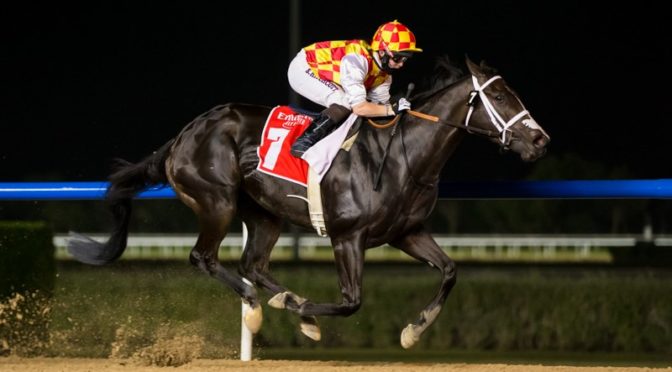 The carnival is finally back and we at Ledvolten will of course share our views. Remember that the boys in blue seldom have a slow start. Expect them to be firing today. Also, remember that favorites do oblige at a 40 % clip in non handicaps, 30 % in handicaps.

The first race is a handicap scheduled for a 2.30 start (Greenwich Mean Time) corresponding to 9.30 AM Eastern Time here in the states. The distance is 7 furlongs (1400 meters) and 5 Rio Angie (Honor Code) is the favorite at 5/2. She loves the surface and was very much improved here in November. She goes well fresh and should make a bold bid from the front despite the bad draw. She will start from stall 9 which is on the very outside. Here is a video of her latest win.

Stablemate 7 Golden Goal (Dark Angel) should also be thereabouts and it would be foolish to underestimate Dubai Icon (New Approach). 10/1 is normally fantastic value for a horse from Godolphin/Dettori/Suroor but Dubai Icon would be better suited by a couple of extra furlongs.

Next we will have a Listed handicap over 1 1/2 mile (2400 m) on turf. Six of the 14 runners are wearing the royal blue silks and the boys in blue dominate the betting market. 4 Walton Street (Cape Cross) is trading at 9/2 and will have William Buick in the irons. Charlie Appelby will also be saddling 2 Ispolini (Dubawi), current odds 13/2, and 10 American Grafitti (Pivotal) at 8/1. Saeed bin Suroor best chance is 3 Desert Fire (Cape Cross) ridden by Frankie and trading at 6/1. 6 Dubai Future (Dubawi) is at 7/1 and 8 Volcanic Sky (Street Cry) is at 11/1. It is very hard to select the winner here, but Ispolini is probably aiming for longer distances and should not win today. Dubai Future won over course and distance last year but that was from a mark of 92, he is 11 pounds higher today. American Grafitti has to prove that he can handle the distance but he should be helped by the low weight. Walton Street and Desert Fire should both go close but preference is for another horse.

1 Communique (Casamento) is making his local debut for S bin Ghadayer who has taken over training from Mark Johnston. This is a Group 1 horse who loves the distance and is best from the front. 7/1 is appealing enough. Each Way is the way to do it.

A Group 3 over 6 furlongs on the dirt. All our money will be riding with 3 Gladiator King (Curlin) who goes well first time out for the season. He is proven over course and distance (won this race last year) and 11/10 is what you could and should expect. I would be all over it if I were you. 4 Good Effort (Shamardal) flopped at Meydan when last seen. 2 Bochart (Dubawi) should be the one challenging Gladiator King for the win. Just bet Gladiator King.

Singspiel Stakes (Gr.2) over 9 furlongs (1800 meter) on turf is next. 11 Military March (New Approach) was last seen in the 2000 Guineas where he was fourth, beaten with less than four lengths. He can be anything. 9 Zakouski (Shamardal) is a more proven commodity. He won at this level last year but is stepping up in distance today. 5/2 is more than fair. You don’t want to miss 10 Kinross (Kingman) who has been campaigned vs the best since he was 2 years old. Pinatubo, Kameko and their likes proved too strong last year, but later he won a Listed at Kempton. 11/1 is generous. 7 Mythical Magic (Iffraaj) is closely matched with Zakouski but the price is more appealing. 3 Dream Castle (Frankel) won the Jebel Hatta 2019 and was fourth 2020. There is no reason to believe that he will be far away come the finish line.

Maktoum Challenge (Gr.2) over a mile on the dirt. 2 Capezzano (Bernardini) is a fantastic miler and is at his best here. You won’t find him in the winner’s enclosure on Dubai World Cup day, but today should be his day. The draw might spoil his chances and it can be rewarding to look elsewhere. 5 Kimbear (Temple City) is blessed with tactical pace and might help Capezzano forward. He is drawn eight with Capezzano in nine. 7 Military Law (Dubawi) is classy and has a very good draw. 10 Salute The Soldier (Sepoy) is quick out of the gate and is drawn at the rail. He will be able to stalk Capezzano/Kimbear and will pounce on the lead in the stretch. He is 7/2 right now but might drift when Capezzano finds even more support.

7 furlongs (1400 meter) Group 2 on the turf. Godolphin is represented by five of the 10 runners and 3 D’bai (Dubawi) won this reace in 2019. The full brother to Dubawi Gold goes well fresh and goes well for James Doyle. 9 Velorum (Sea The Stars) has been shortening from 7/1 into 5/1 which of course is interesting. On paper it is hard to believe ha has got the class for this. 5 Glorious Journey (Dubawi) won this last year. William Buick takes the ride for Appelby and Her Highness Sheikha Al Jalila Racing. Glorious Journey is the current favorite at 6/4. Must have a very good chance. 10 Final Song (Dark Angel) is open to improvement. She was only beaten a length by Glorious Journey at Newbury in September.

We close out the card with a handicap for horses rated above 90. The top weight is 60 kilos and is carried by 1 Ekhtiyaar (Bated Breath), 2 Equilateral (Equiano) and 3 Lazuli (Dubawi). Lazuli is the favorite at 6/4 in this race over the minimum distance, five furlongs on the turf. Lazuli beat Equilateral last time out but is one pound worse off today and it will be different ground this time. The safe choice is Equilateral who excels on Meydans turf. 12 year old 4 Caspian Prince (Dylan Thomas) has been a regular at the carnival and is seldom far off at the finishing line. He is a decent each way bet at 10/1.