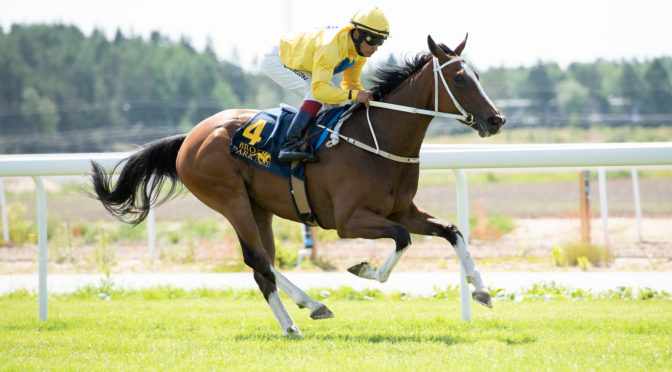 The coming Saturday will feature some good racing from Meydan. It is Super Saturday, the dress rehearsal for Dubai World Cup. The fields are full and you can expect more competitive racing and fewer ”strange” results like the stable’s second string winning with the favorite being passively ridden, as we have seen quite a few times during the Carnival.

The day will start early here in America. It will be at 12 o’clock in England, (13.00 in Sweden) means that we will be off and running at 7 am EST.

Twelve horses will compete for a total of 150,000 dollars. I fully expect 1 El Patriota (Ecologo) to become an odds-on favorite. The Uruguayan raider won a local Group 1 home in Montevideo before shipping and showed a tremendous turn of foot in the Trial. Drawn in stall 6, not much can go wrong.

Completing the exacta should be a battle between 10 Speight’spercomete (Speightstown) who is not expected to reverse form with the favorite, but could continue to progress and snatch second. 8 Panadol (Flatter) comes from a maiden win, has a bad draw and this race is so much tougher. Should still be in the mix. 6 Leopardo (Cairo Prince) will surely be popular under William Buick. Mark Johnston’s runner was more than nine lengths behind El Patriota in the Trial but is expected to come forward, now having two races under his belt. 3 Endifaa (Muhaarar) was beaten only two lengths in the Trial, but was almost eight behind Panadol latest.

Update, friday afternoon. El Patriota is good value at 11/8 and Leopardo is the hot ticket coming in to 14/1 from 20/1. Expect the shortening to continue.

4 Dubai Warrior (Dansili) is not a turf horse and he has never tried the distance. Discard this one despite the Gosden/Dettori combo. 6 Walton Street (Cape Cross) defeated 3 Dubai Future (Dubawi) easily latest over course and distance. He is taken to repeat.

There is not much form to care about in this race and Swedish Derby hero 5 Red Cactus (Hard Spun) might actually run into the money despite facing a stiff task at the weights.

6 Walton Street to win and 7 Brilliant Light to complete the Exacta.

Update, Walton Street is way too short at 2/1 ON! Brilliant Light is brilliant each way value at 12/1 and the exacta is still live.

The pace will be fast, with 4 Bochart (Dubawi) expected to try and go wire to wire from stall two. 5 Canvassed (Shamardal) was unlucky with the draw (gate 12) but comes in splendid form. Swedish runner 7 Es Raco (Holy Roman Emperor) is a beautiful horse being calmer as a gelding. Might be able to drop in behind the leaders for some minor money or more. 8 Good Effort (Shamardal) will have to spend some energy to get to the front from gate 10. He is expected to come forward from his last effort which was good in itself. The booking of Frankie Dettori catches the eye. 9 Important Mission (More Than Ready) is another confirmed front runner, but will they change tactics from gate 13? 10 Lavaspin (Hard Spun) is beautifully drawn in stall 6. Will probably just stalk the hot pace.

American import 11 Premier Star (Tapiture) won the Jersey Shore Stakes for Michael Trombetta. Now trained by Doug Watson, he is expected to make a huge impact on the sprinting scene in Dubai. Drawn five is perfect for him and Andrea Atzeni shouldn’t be afraid of hugging the rail. Look at the ride from Paco Lopez in the Jersey Shore.

Premier Star is tough and won’t hesitate to go into a narrow gap.

13 Upper Class (Tiger Heart) is another raider from Uruguay. He needs to improve.

Update, Canvassed is a 5/2 favorite and that is unplayable from the draw. Premier Star is fair at 3/1 coming in from 10/3. 4 Bochart has had no friends in the betting market and is now a value bet at 9/1. Lavaspin is 28/1 and can win this.

This race has attracted a lot of runners. 16 will be able to start and we have two reserves coming into the race should there be any scratches. Both reserve runners are from Godolphin and it is really strange that the outfit might just have one runner in the race!

5 Dubai Icon (New Approach) should be right there form-wise and the distance is probably his best even though they have campaigned him over further. Drawn 14th, he is a pass for me this time.

9 Midnight Sands (Speightstown) wasn’t done any favors by the draw (12th). His credentials are second to none and Doug Watson and Meydan seem to bring Midnight Sands to his best. I can’t recommend taking him at a short price from this draw, but he will not be far away come the finish line.

7 Kimbear (Temple City) is another Watson horse good enough to win a race like this. Perfectly drawn in 4th, it is a must that they ride him optimistically as that is the way to success here for Kimbear.

10 North America (Dubawi) might be able to get a comfortable lead. He is classy and strong enough to withstand some pressure. We haven’t seen him for over a year, but the form tells us that he has been winning after a 454-day break earlier in his career.

Update, Midnight Sands is 3/1 and no value, but certainly not extremely expensive. North America at 10/3 seems a better bet. I will ride with Kimbear each way at 12/1.

7 Lord Glitters (Whipper) has been convincing in two outings so far. The likely favorite is enjoying the distance and is in true form. The only negative is that this is not the classiest of horses. We are happy to take him on today.

Godolphin has entered 1 Al Suhail (Dubawi) stepping up in trip. 2 Art du Val (No Nay Never) is improving and gets the trip. 9 furlongs is his best. 10 Royal Marine (Raven’s Pass) will finally get Frankie in the saddle and that just might do it.

Shadwell’s 5 Eqtiraan (Helmet) is overlooked by the oddsmakers. Got a decent draw and Crowley is up. I have already taken 20/1 each way, which is clearly wrong. 4 Court House (Dawn Approach) has been knocking on the door lately and Crisford’s runner could surprise this time. A good place bet, and make sure to include Court House in exotics.

8 Salute The Soldier (Sepoy) finally came true last time out. The distance this time might be a stretch but he will surely make the frame. 9 Secret Ambition (Exceed And Excel) is another one not really suited by the distance. Wait for better opportunities for these two.

2 Firnas (Dubawi) and 7 Saltarin Dubai (E Dubai) are closely matched in form and will both come out from good draws in the middle. 1 Dubai Mirage (Dubawi) looks like he is getting there. It is puzzling that oddsmaker laid him at 16/1! Frankie is Frankie and it is time for Dubai Mirage to take another step forward. 11 Thegreatcollection (Saint Anddan) is always thereabout. Might make the frame this time as well.

Update, Salute The Soldier is too short at 9/4. Secret Ambition is bad value at 7/2 and Thegreatcollection is no value at 3/1.Dubai Mirage is now 22/1. Both Firnas and Saltarin Dubai have drifted a lot and are now great value at 16/1 and 18/1.

As impressed as I am with Meydan, I loved Nad Al Sheba more. A little more charming, but still grand. This turf sprint over 1200 meters is an intriguing one. Shadwell, or rather Sheik Hamdan, has seven of the fourteen runners and Godolphin has got three, leaving four others to compete. Jim Crowley is up on 1 Ekthiyaar (Bated Breath). As good as this horse is, he has always ”struggled” on this level and we will take him on yet again. It would be interesting to see Godolphin’s 4 Man Of Promise (Into Mischief) on the dirt, but the turf form is good enough to get involved come the finish line. The true blue colors are carried by 8 Royal Crusade (Shamardal) who is lacking current form. Is this just a stepping stone? Or is he good enough already? Winning a Group 3 at Deauville is usually very good form. 13 Final Song (Dark Angel) is drawn towards the rail and is coming into form. Frankie might opt for more aggressive tactics today and that could very well pay off.

Update, the has been very strong support for Royal Crusade. It is hard to argue with that market move. Final Song at 15/2 can be used each way, but Royal Crusade has to be given a lot of respect.