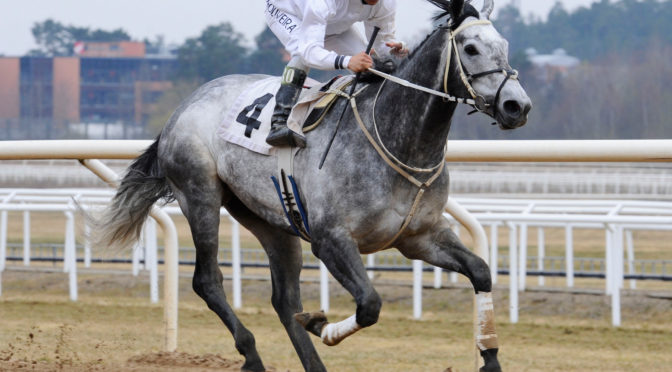 The Swedish racing season is just starting up and today’s card is an interesting one from a betting perspective though it is lacking in quality.

Race #1 is a six furlong sprint and the pace will be hot. 1 Time For Action comes from a win over course and distance. She is gifted with a lot of pace but will probably lack the stamina to hold on here as 3 Franciskus might be pressing the pace. 9 Rival Son is another one that is likely to press the pace. Being a tricky ride (will drift outwards out of the bend) connections have called on champion Per Anders Gråberg, making Rival Son the probable favorite. 8 Little Warrior is closely matched with stable companion Time For Action. The old-timer is very well weighted with Rival Son (compare form from January 19) and will benefit from a contested pace. He would prefer a slower dirt track. 6 Zalalaat is only three years old and shouldn’t be able to win despite the hefty allowance. The form is better than it looks and she has some pace and might be able to drop in behind the leaders. Outsider. 7 Bagre is the nap from Dagens Spel. Should be better suited by the turf and only a longshot.

Race #2 is a staying handicap where we have five horses returning from last week. This means that they will start from last weeks mark and since Sweden does not have a system with penalties 2 Milton will be able to compete on very favorable terms. The form is solid, he has won over this longer distance before and last year he showed that he has no problem with racing week-to-week. Milton should win, but a couple of interesting stayers are worth watching. 9 Shylock and 1 Kew Garden are from Caroline Malmborg’s stable and stable jockey Fredrik Janetzky opts for Shylock. Kew Garden managed to get Per Anders Gråberg up and both horses should be thereabouts. 7 The Gurka is a confirmed stayer and has shown some form over the mile lately. This is a more suitable opportunity. 4 Littleredcorvette is not someone to trust in a battle for the win as she is happy collecting second places. She was beaten by 10 lengths last time out but the winner confirmed the form with another victory after that.

Race #3 is a handicap over 10 1/2 furlongs. These horses have plenty of collateral form and it looks like a very open race. 8 Ocean Side has been in tremendous form, but the handicapper noticed and has penalized him over and over again. It is not much between him and 2 Dapple but Dapple will get the vote thanks to the jockey change. He is not an easy ride and have been tried by apprentices the last four starts. Now they engage leading jockey Elione Chaves which should do the trick. 7 Marta was a very good three year old. The distance is perfect and you don’t travel from Jagersro to get a minor share of the money. The trainer knows how to get them ready after a break but claims that the goal is another race coming up in a few weeks. Marta is one for the shortlist. 5 Alchemist could be an outsider with Per Anders Gråberg up. Alchemist last start was in November and he needed two starts in 2018 and 2019 before he was ready to win.

Race #4 is a handicap over a mile. In this class they will beat each-other back and forth. 1 Lady Kheleyf will hit the front early which should be an advantage. The mile is normally a little bit too far for her, but it might work under a strong jockey. 2 Spirit River is good, but the weight should be killing his chances. The trainer is optimistic regarding 3 Happy Honey Bee who showed form last week. 4 Felixya Sacc is closely matched with Lady Kheleyf. 5 Surfers Paradise didn’t show anything last week and must improve. 6 Fabricio ran a good race last time out. Had a difficult trip after a slow start but closed well. Back up in distance he should make his presence felt. 7 Gold Sensation might improve from last week under an apprentice claiming 4 kilos. 8 Cuban Queen is a recent course and distance winner and should be in the mix. 9 Aretha comes from a red hot barn and is an outsider under Chaves. 10 Mindbender will find this an uphill task but 11 Meandro is one of the horses the backstrech is whispering about.

Race #5 is for three year olds. 2 Midnight Oil should be a horse for the classics later on and should win this without breaking a sweat. The trainer has told the public that Midnight Oil is not that race fit yet. 3 Den of Thieves won last week and could be the one upsetting the favorite.

Race #6 is a good handicap over six furlongs. The pace will be hot since 6 Stolen Tango will try do it all from the front. 4 Rossmos Secret is very happy with that and will be close to the leader. 7 Double Cash will try to catch them at the very end and might do that. All three are apprentice ridden and could be prone to mistakes. 5 Von Blucher has the best jockey up and the stable is firing at the moment. The elder of the field is 9 Falmouth Bay. Coming from three straight wins and preferring winter conditions he is up against it this time. On the other hand, we want him to win again because he is such a fantastic horse. (the picture of this post shows him winning in 2012)

Race #7 is a maiden race where 8 Fidji should be able to overcome a bad draw with the help of Per Anders Gråberg. This is a really bad maiden and Fidji is obliged to win.Don’t take short odds, it is still a maiden race.

Race #8 is for arabians. Always tricky and if you know you know. Most horses would have preferred a longer distance but 8 Djelano has been doing ok over the short distance. 4 Afja’an is the best horse but the apprentice is probably twice the height of the horse and might not fit the horse. A couple of first timers and a couple of imports makes this field a true puzzle.